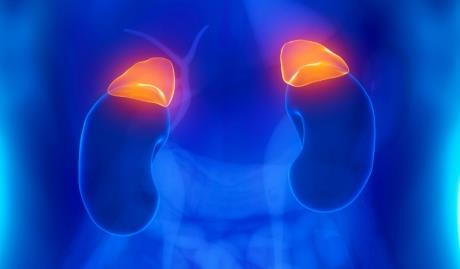 Adrenal cancer, also known as adrenocortical cancer, occurs when malignant cells grow in the outer layer of the adrenal gland. Cancer can also occur in the adrenal medulla, which is an extension of the nervous system. The tumors can either be benign (most often pheochromocytomas) or malignant (neuroblastomas). Adrenal gland cancer is a rare disease, affecting 0.72 out a million people annually.

Up to 80 percent of tumors in the adrenal cortex are functioning, which means that the tumors produce excess amounts of one or more of the following hormones:

Nonfunctioning tumors, which do not produce hormones, may not cause any symptoms during the early stages of the adrenal cancer.

Adrenal cancer symptoms include a lump or feeling of fullness in the abdomen, or pain in the back or abdomen.In 60 percent of people with this condition, the main symptoms are caused by an excess of hormones released by the tumor cells.

The exact symptoms depend upon the excess hormones produced.

Several methods and tests may be used to diagnose adrenal cancer, including:

Staging involves determining how far advanced a tumor is. This includes the size of the tumor and whether it has spread to other locations from the initial (primary) site.

Cancer can spread through the body by invading surrounding normal tissue. Adrenal cancer cells can also migrate to distant areas (metastasis) through the blood or the lymph system (part of the body’s immune system).

The stages of adrenal cancer are:

Adrenal cancer treatments are available, and the best option will depend on the stage in which the cancer was initally discovered.