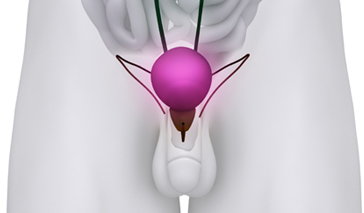 Posterior urethral valve (PUV) refers to a defect of the urethra, which is the tube that transports urine from the bladder to the genitals so that urine can pass out of the body. PUV occurs when the urethral valves—consisting of small sheets of tissue—have a constricted, slit-like opening that partially obstructs urine flow. As a result, the fluid reverses its flow and causes the organs along the urinary tract (including the ureters, bladder, urethra, and kidneys) to become engorged and swollen. This can lead to cell and tissue damage. The amount of obstruction caused by this urologic condition will determine the severity of the urinary tract problems.

A fetus' urethra develops while in the womb. Inside of the urethra tube is tissue; it too grows. At some point in normal development, however, the tube and its tissue stop forming. With posterior urethral valve, the tissue continues to grow, forming a flap which restricts the release of urine. The exact reason why the tissue continues building is unknown, but genetics may be involved, as has been noted in cases involving twins and siblings. Posterior urethral valve (PUV), which affects one in 8,000 male infants, may also occur by chance.

Posterior urethral valve is the most common contributor of urinary tract obstruction in children. The disorder may strike with varying degrees, from mild to severe. Every child with PUV may experience symptoms in different ways, but the following are the most common symptoms of PUV:

In addition to the above symptoms, fever, vomiting, loss of appetite, and irritability may occur.

When pregnant, a fetal ultrasound is performed to monitor the health of the fetus. This imaging test often makes a soft diagnosis of posterior urethral valve, which is most commonly characterized by a dilated bladder and kidneys. An ultrasound, which uses sound waves to create images of the body's organs, doesn't necessarily verify the condition; rather, it reveals the amount of swelling of the kidneys as well as the bladder's shape.

Should the diagnosis not be made in utero, many children are later diagnosed after they have developed a severe urinary tract infection and require medical attention. This may then prompt diagnostic tests, such as:

Relieving pressure on the urinary tract and restoring fluids are the first steps when considering PUV treatment options. Once these areas are managed, and depending on the severity of the condition, surgery may be performed. This can include an endoscopic valve ablation, a pyleostomy, or a vesicotomy.