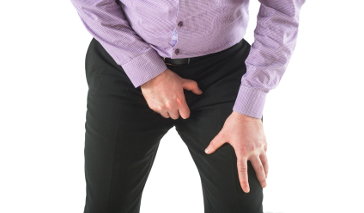 Priapism is a prolonged, unwanted, and sometimes painful erection that lasts for more than four hours and is unrelated to sexual stimulation.

There are two types of priapism: low flow and high flow.

Low flow priapism: Also called “ischemic," this is the more common type of priapism, making up 80 to 90 percent of all cases. Low flow priapism occurs when veins in the penis constrict and prevent blood from leaving the erection chambers (corpora cavernosa). It can be caused by blood disorders, prescription medication, and substance use. Some men have "stuttering" priapism, which occurs when there are recurrent bouts of low flow priapism interspersed with periods of relief. While low flow priapism may eventually resolve on its own, it will not resolve before the tissue is damaged. This type of priapism requires immediate intervention to avoid irreversible harm to the penis.

High flow priapism: Also known as “nonischemic," high flow priapism is rare and occurs when an artery ruptures, causing an influx of blood to the penis. This is usually due to injury and often resolves spontaneously without causing harm to the penis. In severe cases, where tissue and artery damage occur, surgical repair will be required.

A physical exam of the genitals, abdomen, groin, and perineum is usually the first step to diagnosing the condition and determining which type of priapism is involved based on penile rigidity, sensitivity, and signs of injury or trauma.

Diagnostic tests can include:

If the priapism is ischemic in nature, there are a number of treatment options, including aspiration, medication, and surgery. Since nonischemic priapism often resolves without treatment, doctors typically take a watch-and-wait approach. Learn more about priapism treatment options.

Bassett J, & Rajfer J. (2010). Diagnostic and therapeutic options for the management of ischemic and nonischemic priapism. Reviews in Urology.

Hekel I, & Meuleman E. (2008). Idiopathic low-flow priapism in prepuberty: a case report and a review of literature. Advances in Urology.

Priapism Treatments
When Your Prolonged Erection Turns into an Emergency: Signs Your Penis Is In Danger
Tried and True Erectile Dysfunction Treatments from Viagra to Testosterone Therapy