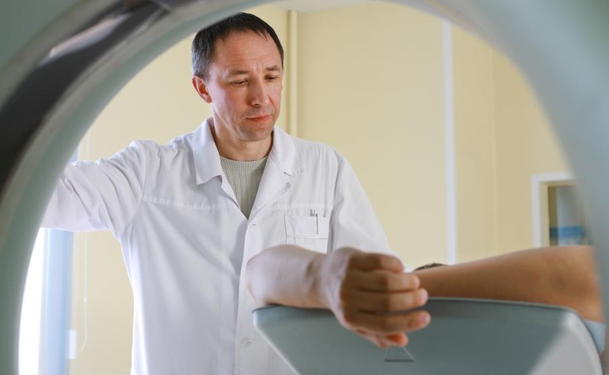 A computed tomography (CT) scan and magnetic resonance imaging (MRI) are technologies that use forms of energy to generate images of the body's internal structures and organs. In urology, these devices can investigate both the urinary tract and male reproductive system to identify and evaluate certain symptoms and conditions, including calculi, tumors, cysts, blockages, bleeding, and infections.

The machine itself is like a large scanner with a powerful magnet. While a patient rests inside, the magnetic field realigns the atomic nuclei in the body, while the radio waves cause the aligned atoms to generate signals that can be detected by the scanner and recorded to create cross-sectional pictures of the body part being scanned.

MRI is particularly adept at making a distinction between the various soft tissues of the body, allowing it to be useful in diagnosing and detecting cancer as well as unusual growths—more so than CT scans or traditional X-rays, which utilize ionizing radiation. Contrast agents may be injected into the veins to enhance the appearance of tumors and growths.

In urology, MRI can locate a solid mass in the kidney, and can measure the aggressiveness of kidney cancer. It can even identify the spread of cancer into renal veins or the inferior vena cava, which is the large blood vessel responsible for carrying blood back to the heart. This vital data permits doctors to decipher the size of a tumor and plan the proper treatment.

Other conditions under which this test may be performed include:

Computed tomography scans, sometimes called CT or CAT scans, use X-rays—passed through the body—to generate cross-sectional images of the body's internal structures and organs, including the kidneys, ureters, and bladder. As the CT scanner transmits X-rays through the body part being targeted, each rotation of the scanner creates a picture of a thin slice of the organ. All of the pictures are combined and saved onto a computer, where they can later be printed and utilized by a physician to make a diagnosis and devise a treatment plan.

CT scans may be used alone or with intravenous injections of contrast dye. The contrast agent, if called for, allows the structures and organs to appear more vividly.

Since CT has the ability to detect liquid versus solid inside the body's structures, it can provide a great deal of information about the type of cancer, and can detect the presence of tumors, urinary tract stones, or even cysts. For example, if a patient is experiencing bladder discomfort or urinary issues, such as blood in urine or painful urination, a doctor may suspect cancer of the bladder. One of the diagnostic tools used to identify the presence of cancer is a CT scan of the abdomen and pelvis. This allows the doctor to discern whether or not the urinary system is functioning normally. If cancer is present, CT scans can estimate if it has spread and if so, where. It can also determine the cancer's stage.

A CT scan can additionally be used to identify the following conditions and symptoms:

Some patients should not use MRI. Those with certain forms of medical implants or metallic implants should not undergo MRI scanning. While cardiovascular stints are acceptable, those with surgical prostheses and ferromagnetic aneurism clips are generally not recommended for MRI. Because the magnet is very strong it has the potential to move the internal metal object and cause trauma or damage due to overheating of the object.

Further, there are some risks associated with the powerful magnetic fields generated by the MRI scanning. Radio waves and cryogenic liquids may also be associated with risks. Those who are sensitive to noise or enclosed spaces and experience claustrophobia may not be comfortable in the MRI scanning device; however, there are some newer models that feature a more open design.

CT scans and traditional X-rays use ionizing radiation, whereas MRI scans do not. It is estimated that 0.4% of cancers in the United States are due to CT scans. This is because the ionizing radiation (X-ray) used in CT scans damage DNA. When your cells are unable to properly repair the damaged or mutated DNA, cancer may result.

Many CT scans involve intravenously injected radiocontrast. This contrast agent can cause adverse affects in some patients including itching, rash, nausea, or vomiting. Contrast-induced nephropathy is also a risk, particularly for those already diagnosed with a renal insufficiency condition, diabetes, or reduced intravascular volume.