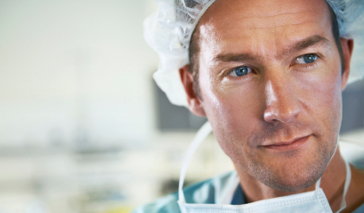 Priapism is an often painful penile erection that lasts four hours or more. Unlike with a normal erection—when blood vessels in the penis expand and then contract after stimulation is over—with priapism, blood becomes trapped in the penis and is unable to drain. The symptoms of priapism are unrelated to sexual stimulation and in two-thirds of cases it is due to underlying sources, such as sickle cell disease, pelvic infections, pelvic tumors, or prescription medications. Left untreated, blood vessels in the penis can rupture or the tissue can scar, leading to permanent erectile dysfunction.

There are two types of priapism, ischemic (low-flow) and nonischemic (high-flow), and treatment varies depending on the type, its severity, and the underlying cause.

Ischemic or "low-flow" priapism occurs when blood disorders (such as sickle cell anemia or leukemia), prescription medication, or substance use cause the veins in the penis to constrict and keep blood from exiting the erection chambers (corpora cavernosa). Some men have "stuttering" priapism, which involves recurrent bouts of ischemic priapism mixed with periods of relief.

The two major treatments for ischemic priapism are:

Nonischemic or "high-flow" priapism is rare and usually results when an artery in the penis ruptures due to penile trauma or perineal injury, causing an influx of blood to flow in. Since this type of priapism can resolve spontaneously after weeks of healing, physicians will often take a watch-and-wait approach.

Intervention for nonischemic priapism is conservative and usually consists of watching and waiting, combined with ice packs: Icing the penis and perineum can reduce swelling and encourage blood to flow out of the penis.

When nonsurgical treatment options are ineffective, or when damage has resulted, surgery may be required.

For ischemic priapism, surgical treatment may include:

For nonischemic priapism, surgical options are:

Prognosis depends on the type of priapism and its severity. In cases of ischemic priapism, if it is treated early and successfully, erectile function should return to normal. If care is delayed, the penis may be scarred and could permanently lose erectile function (possibly erectile dysfunction).

With nonischemic priapism, the prognosis is often good since the blood supply to the penis is not compromised, just disrupted. If damage has occurred, surgery can repair the ruptures and allow erectile function to return to normal.

Priapism
When Your Prolonged Erection Turns into an Emergency: Signs Your Penis Is In Danger
Peyronie's Disease