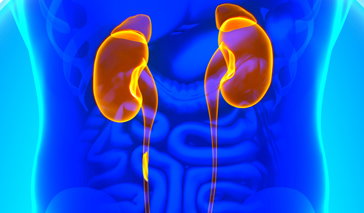 Retroperitoneal fibrosis is a rare condition that occurs when the ureters (tubes that carry urine from the kidneys to the bladder) become blocked due to a mass located behind the stomach and intestines. The obstruction hampers the ureters ability to transport urine from the kidneys to the bladder. Early on, the individual may experience dull pain in the abdomen that progresses, swelling of one leg, and a change of color in both legs due to compromised blood flow. Over time, however, urinary output may be significantly reduced or absent, renal failure may present, and severe abdominal pain with hemorrhaging may occur as a result of intestinal tissue death.

While it is unknown why extra fibrous tissue develops behind the stomach and intestines, or why people aged 40 to 60 are more at risk, retroperitoneal fibrosis can be linked to benign and malignant causes. Though a standard procedure for treating this disorder has not been determined, medication and surgery are two viable options.

Anti-inflammatories--injected or taken orally--are the first line of action when treating retroperitoneal fibrosis. Called corticosteroids, these drugs suppress the immune system and may reduce swelling as well as shrink the blockage. Should steroid treatment fail, a biopsy is typically performed to confirm the diagnosis. If the condition is present and progressive, other immune system-suppressing medications like methotrexate, cyclophosphamide and tamoxifen are then prescribed but may carry a variety of symptoms including:

Surgery and Stents for Retroperitoneal Fibrosis

When medication doesn't successfully treat the condition, surgery and draining tubes (stents) are often the next steps.

Stents can also be used. This tube is positioned through the patient’s back to reach the kidney, bypassing the obstruction and allowing urine to drain out.

The magnitude of the condition, and the amount of kidney damage, if any, will determine the prognosis. If the kidneys have been severely damaged as a result of prolonged urine build up, the effects can be permanent and could require more invasive surgery, such as a nephrectomy, to prevent their failure.

A small study published in 2011 in which 36 patients in remission with idiopathic retroperitoneal fibrosis were randomly assigned to either prednisone, a steroid, or tamoxifen, to see which drug would be more effective in maintaining remission. The steroid was found to be more effective--after more than two years, the relapse probability with tamoxifen was 50 percent; with prednisone, 17 percent.