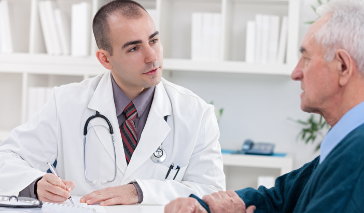 Benign prostatic hyperplasia (BPH) is the condition referring to an enlarged prostate. When a man's prostate gland swells—it puts pressure on the urethra (the tube that carries urine out of the body), which can lead to urination and bladder problems. BPH does not increase prostate cancer risk, but it can cause a number of troublesome symptoms. Most of BPH symptoms are very treatable, and a variety of remedies exist.

BPH is the most common prostate problem among men over 50. In fact, it's so common that all men will develop it if they live long enough. The cause is unknown but, according to the American Urological Association, there are a few widely accepted factors that may play a role in the gland’s growth, including age and the testicles themselves. 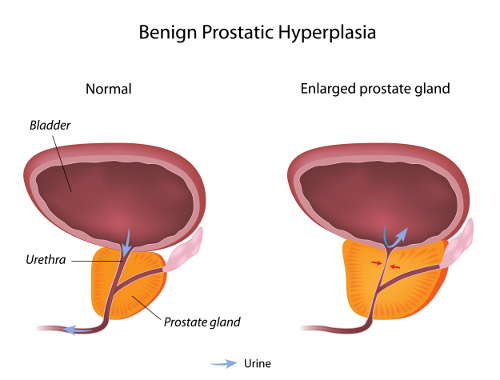 The prostate constantly increases in size during most of a man’s life, with the first stage of growth occurring early in puberty and the second around age 25.

The older a man gets, the more likely he is to have an enlarged prostate. According to the American Urological Association, more than half of all men have benign prostatic hyperplasia by age 60; by age 85, that number goes up to 90 percent.

Testicles, or testes, generate sperm and testosterone-producing androgens (hormones that control masculine traits). Men produce both testosterone and small amounts of estrogen but, as they age, the quantity of active testosterone diminishes, leaving a greater fraction of estrogen.

According to the National Kidney and Urologic Disease Information Clearinghouse, some studies suggest that this higher estrogen-to-testosterone ratio may stimulate cell growth in the prostate, causing the gland to enlarge.

Fewer than 50 of men with the condition show any symptoms, but those who do typically experience changes in urination caused by the growing gland pushing against the urethra. The pressure narrows the passageway or even blocks it completely, leading to steady loss of bladder function.

The most common symptoms include:

More serious symptoms, such as pain while urinating or blood in the urine, might indicate an infection and should be brought to a physician’s attention.

The prostate's size does not necessarily indicate the severity of the condition. Some men have significantly enlarged glands but few symptoms, while others have smaller prostates but more symptoms. Occasionally, a man may not know he even has BPH until he is unable to urinate.

A physician physically examines the prostate gland using a finger to perform a rectal exam. Other tests include: checking the urine flow rate, determining how much urine is left in the bladder after urination, pressure-flow studies that calculate the amount of pressure in the bladder during urination, a rectal ultrasound, and a prostate biopsy.

Because infection can also cause an enlarged prostate, a physician may also conduct a urine culture or urinalysis to check for signs of infection and blood in the urine.

Benign prostatic hyperplasia treatment depending on the severity of the symptoms how much those symptoms encroach on the patient’s daily life, and the presence of other medical conditions.

Benign Prostatic Hyperplasia Treatments
What Are the Most Common Urological Issues?
Transurethral Microwave Thermotherapy in the Treatment of Enlarged Prostate