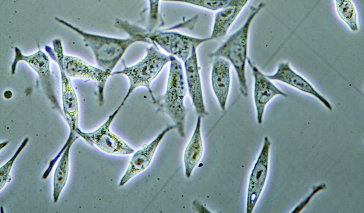 The prostate, which is located below the bladder and wraps around a section of the urethra, is a walnut-sized reproductive gland responsible for producing a milky fluid that makes up the majority of the male ejaculate. Prostate cancer occurs when cells in the prostate mutate and grow out of control--most often, it's the cells in the gland (not the muscle) of the prostate, a type of cancer referred to as adenocarcinoma.

The disease spreads at different rates in different people: While it develops quite rapidly in some men, others can have the disease for many years yet die of other causes. And some men can die of the disease after experiencing no symptoms whatsoever.

Obesity and family history also increase risk. So does ethnicity: The disease is more than twice as prevalent in African American than Caucasian men.

While researchers know that abnormal cell development is a result of DNA mutations, and that these mutations are at the root of cancer development, the instigating factors have not been fully uncovered. Mutated cells divide rapidly, allowing them to accumulate into tumors and take over nearby tissue. When cells break off, they spread through blood and lymph vessels and can metastasize in different regions of the body.

Because the prostate is located below the bladder, one of the main indicators of prostate health is urine flow. Weak, interrupted, or frequent urination (particularly at night) can all indicate a prostate issue. Difficulty urinating, painful urination, or a burning sensation may also be symptomatic.

Additional symptoms can include consistent pain in back, hips or pelvis, as well as blood in urine or semen, or pain during ejaculation. Most of these can also indicate other urinary-tract problems, however, so contact a physician when experiencing any of these symptoms.

If these screenings detect abnormalities, further testing may be required to rule out prostate cancer. These tests include:

If a biopsy confirms the presence of cancerous cells, the next step is to grade the cancer by determining its aggressiveness. During this process, the tissue samples are analyzed alongside healthy prostate cells. The more aggressive the cancer, the higher the grade. On a scale of two to ten, a Gleason Score of 2 means the cancer is not aggressive and the cancerous area looks similar to normal tissue. A Gleason Score of 10 has the worst prognosis. 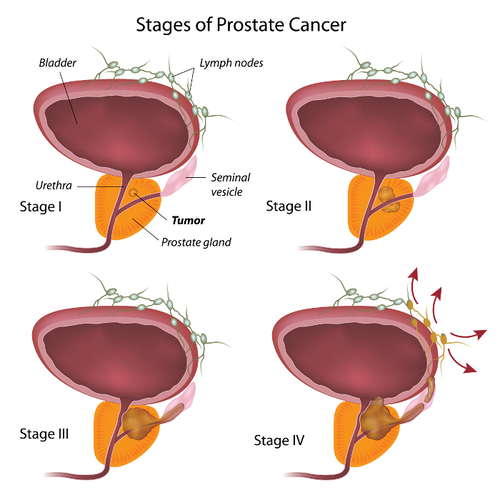 If the physician has reason to believe that the disease has spread, she will order a bone scan, an ultrasound, a CT scan, and/or an MRI in order to stage the cancer. The stages are defined as:

An oncologist will use information about the cancer's grade and stage to determine the best treatment plan.

Treatment for prostate cancer depends on the aggressiveness of the disease, the extent of its spread, and the patient's overall health.

In some cases, a physician will recommend watching and waiting, an approach also known as 'active surveillance.' This requires regular blood tests, rectal exams, and/or biopsies to ensure the cancer is not advancing. For cancer that has progressed, treatment can include radiation therapy, hormone therapy, surgery, chemotherapy, freezing, or heating. (For more information on these approaches and their side effects, see Prostate Cancer Treatments and consult a doctor.)