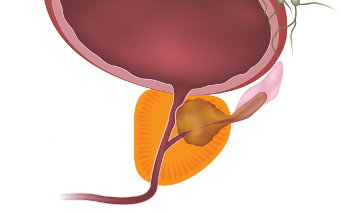 Prostate cancer treatment depends on a number of variables, including the aggressiveness of the cancer, how fast and how far it has spread, as well as a patient's overall health. Each treatment has side effects, and immediate therapy is not always necessary.

Many men diagnosed with early-stage prostate cancer are advised to watch and wait, an approach sometimes referred to as 'active surveillance'. This, combined with regular follow up tests (rectal exams, blood tests, and/or biopsy), serves to monitor any changes, and some cancers are so slow growing that they never require treatment.

One thing that does not impact treatment decisions is a man's age: In a 2012 study in the Journal of Cancer Therapy, researchers found no significant difference in treatment response between older and younger patients, no matter the treatment, the cancer's aggressiveness, nor the patient's pre-treatment PSA levels.

Prostate cancer treatment takes many forms: surgery, radiation, chemotherapy, hormones, and ablation. Each of these plays a specific role in the treatment regime.

Side effects: Because of prostate's location, many side effects of radiation therapy are urination related, including frequent, painful, or urgent urination. Other side effects include loose or painful bowel movements and erectile dysfunction.

Additionally, the American Cancer Society warns that even small doses of ionizing radiation increase a person's risk of developing other forms of cancer. The greater the radiation dose, the greater the risk. In particular, cancer of the thyroid, bone marrow or blood (leukemia), lung, skin, breast, and stomach are most strongly linked to prior radiation exposure. Recent research has found no significant differences in the survival rate between those treated with surgery, radiation, or hormones, even when controlling for Gleason score.

Because prostate cancer cells need testosterone to grow, preventing testosterone production can stop their growth or even kill them—a strategy referred to as androgen deprivation therapy. These treatments are generally recommended for men with advanced prostate cancer, or in combination with surgery for those with early stage stage disease. In men with early stage cancer, hormone treatments in advance of radiation therapy may also increase the chances of success.

Androgen-deprivation therapies come in many forms, including:

Side effects of hormone treatment include reduced sex drive, erectile dysfunction, hot flashes, weight gain, and a reduction in bone mass. Additionally, LH-RH agonists can shrink the testicles and increase the risk of heart attack and heart disease.

Sometimes, prostate removal (prostatectomy) may be the best course. This surgery causes low testosterone, often faster than some medications, and involves the removal of the prostate gland, surrounding tissue, and lymph nodes in what's referred to as a radical prostatectomy. This can be done laparoscopically (using a small camera and just a couple small incisions) or with open surgery.

Side effects of radical prostatectomy may include erectile dysfunction and urinary incontinence.

Approaches using heat or cold are only recommended for patients that have not responded to brachytherapy or external radiation, and treatment depends on the patient's age and tumor aggressiveness.

Cryoablation, also known as cryosurgery, is done while a patient is under general anesthesia. The procedure uses ultrasound to guide a hollow needle to the cancerous tissue, where it's used to apply a freezing gas to kill off the cancerous cells. (Some doctors will also recommend a three- to eight-month androgen-deprivation treatment to shrink the prostate beforehand). The procedure takes about two hours and the patient is discharged either the same day or the next morning. The approach comes with serious side effects: Some studies report incidence of impotence in anywhere from 76 to 100 percent of all cases.

Heat, through the use of high-intensity focused ultrasound (HIFU), uses ablation to kill the diseased prostate without damaging surrounding tissue. For this procedure, ultrasound is used to guide a small probe inserted in the rectum so it can direct its beam at the tumor. In a study of 315 patients, HIFU resulted in erectile dysfunction in 22 percent of patients and stress (urinary) incontinence in 13 percent.

Chemotherapy refers to the use of drugs, administered as pills or intravenously, to kill all rapidly dividing cells. This option is usually reserved for people whose cancer has spread (metastasized) to different locations throughout the body.

Each of these options should be discussed at length with an oncologist and urologist. Prostate cancer treatments can affect quality of life, and all side effects should be taken into consideration during a patient's decision-making process.