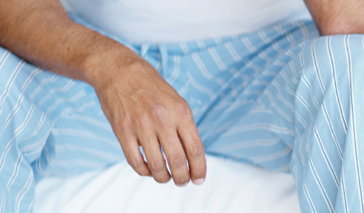 Orchitis refers to the inflammation of one or both testicles, and can be caused by either a viral or bacterial infection. Symptoms can include fatigue, nausea, and fever, and can lead to complications. Orchitis can occur alone (isolated) or concurrent with epididymitis, an inflammation of the epididymis (the coiled tube at the back of the testicle that stores sperm).

Isolated orchitis is most often caused by the mumps virus, and four-fifths of these cases occur in boys under 10 years old. Orchitis symptoms usually appear four to seven days after the start of the initial infection.

Seventy percent of mumps orchitis cases begin in just one affected testicle, but the second is often affected within 1 to 9 days.

Rarely, viral orchitis can be caused by other viruses, such as varicella, echovirus, infectious mononucleosis, or coxsackievirus.

Bacterial orchitis most commonly co-occurs with epididymal inflammation (epididymo-orchitis), and happens when the infection spreads from epididymis to testicle. And unlike viral orchitis, 90 percent of bacterial orchitis cases involve only one testicle.

Causes of bacterial orchitis include:

Symptoms of orchitis can include:

Orchitis can also result in other problems, such as:

How is Orchitis Diagnosed?

Physicians start with medical history and a physical exam (looking for enlarged lymph nodes in the groin, enlarged testicles, and/or enlarged prostate) to determine whether they think orchitis might be present. They may also use one ore more of the following to confirm diagnosis:

How is Orchitis Treated?

The approach for orchitis treatment depends on which type you have. Viral orchitis is treated primarily by relieving the symptoms with pain medications, bed rest, elevation of the scrotum, or hot or cold packs. Bacterial orchitis requires treatment with antibiotics.

Gazibera B, Gojak R, Drnda A, et al. (2012). Spermiogram part of population with the manifest orchitis during an ongoing epidemic of mumps. Med Arh.