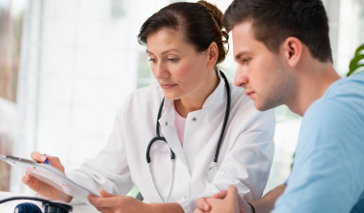 A varicocele is the widening of the veins that run along the cord that supports a man's testicles (the spermatic cord). Like varicose veins, the condition can be caused when valves inside the veins don't work properly. As a result, blood backs up in the veins and causes them to widen and swell.

While some men have no symptoms, others find that a varicocele can impair fertility or cause the affected testicle(s) to atrophy.

How Common Is a Varicocele?

Researchers aren't sure why some men develop a varicocele, but suspect that it may have something to do with genetics, body shape, or general vein abnormalities. For instance, tall, thin men sometimes have a longer vein around the spermatic cord that, combined with higher pressure in the vein, may increase risk of a varicocele.

Additionally, 80 to 90 percent of varicoceles are found on the left side of the scrotum. This may be due to the angle of the vein, increased pressure on that side, or a higher risk of vein compression that can cause blood to back up and the vein to swell.

Varicoceles can also occur bilaterally, on both sides of the scrotum. According to a 2004 study in the journal Fertility and Sterility, as many as 80 percent of men who have a varicocele that can be easily felt on the left side also have one on the right.

Varicoceles are often found during routine physical exams or during infertility workups. They are classified as small, medium or large depending upon whether they can be easily seen or found only by touch. Many men have no symptoms, but those who do may experience pain, discomfort, or scrotal swelling.

While a varicocele may not always need treatment, if untreated it may cause complications such as:

Researchers don't know how varicoceles cause these problems but suspect that, at least in part, it may be due to increased temperature on the varicocele side of the scrotum.

Varicoceles appear as a twisted growth on the spermatic cord and are often described as looking like a bag of worms. They're usually diagnosed with a physical examination, during which a doctor will look at and feel the scrotum first while a man is standing and then again when he's lying down. (Varicocele swelling sometimes goes away when someone lies down due to a decrease in blood pressure inside the vein.) The physician will also check testicle size, since the the side with the varicocele may be smaller.

While not all varicoceles require treatment, when they do there are several available options, including surgery to block the flow of blood to the affected veins. Check out our article for a more detailed look at varicocele treatment and repair.

Barthold, JS. (2011). Abnormalities of the testis and scrotum and their surgical management. Campbell-Walsh Urology, 10th. ed.