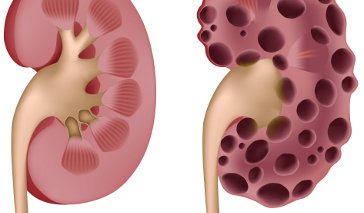 Cystic kidney disease consists of a group of similar (heterogeneous) disorders that result in the development of cysts on the kidney. The cysts are irregular sacs that can be filled with gases, fluids, or solids. If microscopic, treatment may not be necessary. But, if quite large and impacting the function of one (unilateral) or both (bilateral) kidneys, surgery and dialysis are two viable options. While the kidneys are mainly affected in cystic kidney disease disorders, the liver is may too be impacted, showing enlargement and damage.

As kidney function declines, people with cystic kidney disease may require dialysis to remove the wastes that the kidneys normally filter out of the blood. Many patients remain on dialysis on a long-term basis, sometimes for the rest of their lives. Usually this takes the form of hemodialysis, in which blood is transferred from the body into a dialysis machine that then filters out waste products and excess fluids. The filtered blood is returned to the body. Hemodialysis is usually done in an outpatient center three times a week, with each session lasting about four hours.

Surgery can be used to drain infected or painful kidney cysts, to create access points for dialysis, or to remove and replace the kidneys and/or liver.

Prognosis for cystic kidney disease depends on the type of associated disorder and its severity. For example, with ARPKD, between 20-30 percent of infant patients die within the first few hours or days of birth, mainly due to breathing complications caused by having underdeveloped lungs, an attribution to a deficiency of amniotic fluid in the womb. Those who reach age 10 most often have kidney failure and require dialysis or transplantation, and those who survive to adulthood also develop kidney failure along with congenital hepatic fibrosis and bile duct expansion. Additionally, the liver may be enlarged, damaged, and have cysts.

Those with autosomal dominant polycystic kidney disease (ADPKD), clinical symptoms do not usually appear until the age of 30. Still, approximately 50 percent will develop kidney failure and enter end-stage kidney disease between the age of 57-73. Despite this, most deaths are caused by cardiovasular complications and infections, making timely treatment necessary to allay the symptoms and slow the progression of the disease.