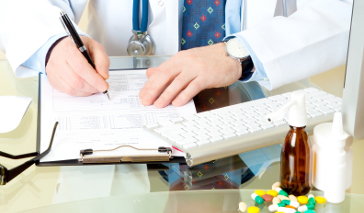 Pyelonephritis is a type of urinary tract infection (UTI) affecting one or both kidneys. It occurs when bacteria or viruses travel into the kidneys from the bladder or invade the kidneys through the bloodstream. Pyelonephritis is typically diagnosed using urinalysis and other tests, and initial treatment consists of antibiotics.

Depending on the severity of the disease, treatment may consist of oral antibiotics on an outpatient basis, or it may require hospitalization and intravenous antibiotics. Some underlying causes of pyelonephritis require surgery to prevent recurring infections. Rarely, pyelonephritis can threaten the kidney (necessitating removal) or cause permanent kidney scars, which can then lead to high blood pressure, chronic kidney disease, and kidney failure.

Medications for the Treatment of Pyelonephritis

Doctors typically treat pyelonephritis with antibiotics to kill the invading bacteria, usually with a 10 to 14 day regimen. (Milder cases may only require a seven-day course.) Healthcare providers often send a urine sample off to a lab while simultaneously starting treatment with an antibiotic known to kill the types of bacteria that most commonly cause infection. Once the lab identifies a patient's specific bacterium and which drugs it is sensitive to, a physician may switch the antibiotic to one that more effectively targets the bacteria.

Severely ill patients may be hospitalized and given fluids and medications intravenously to support the recovering kidney. Blood cultures will also be done to make sure the bacteria have not invaded the bloodstream and caused sepsis (a severe blood infection). Once a patient is stable and can drink enough fluids to stay hydrated, medication can be given orally.

Urine cultures are then repeated at the end of treatment to make sure the infection does not recur. If a repeat test shows infection, a doctor usually prescribes another 14-day course of antibiotics. If infection recurs a third time, antibiotics are prescribed for six weeks. A doctor may also suggest additional tests to discover any underlying causes for the infection.

In addition to antibiotics, acute pyelonephritis may also require surgery if it is accompanied by an abscess, calculi (stones), renal papillary necrosis, or xanthogranulomatous pyelonephritis (XGP).

Three types of abscess may occur with pyelonephritis: renal cortical (renal carbuncle), renal corticomedullary, and perinephritic. All three are treated initially with IV antibiotics for 10 to 14 days, followed by oral antibiotics for two to four weeks. The specific antibiotics are chosen based on which bacteria are found in the urine cultures. Most patients with smaller abscesses (< 3cm) will be cured without surgery. If patients do not respond to antibiotics within a week, a surgeon may drain the abscess, usually using ultrasound or CT imaging to guide a needle into the abscess(es) and drain it (a process called percutaneous drainage). In some cases, the surgeon may insert a catheter through the needle and leave it in to drain the abscess until fever disappears and drain output is minimal.

Other surgical options for abscesses include open drainage, which involves abdominal surgery. Some doctors are also experimenting with laparoscopic drainage. If the abscess is encapsulated, the surgeon may remove it without cutting into it, either though a small incision in the abdomen (laparoscopically) or through a large, open incision in the abdomen (laparotomy). Which procedure is used depends on the size of the abscess. If an abscess must be opened, the surgeon will irrigate the infected area with antibiotics and place a surgical drain near the site.

In severe cases, a surgeon may need to remove part or all of the infected kidney (partial or full nephrectomy). Antibiotic therapy is generally continued for at least two weeks after surgery.

When a UTI is related to kidney or bladder stones, the bacteria can often survive inside the stones despite antibiotic therapy. In cases of acute infection, the stones should be removed immediately. If the stones are small and limited to the bladder, they may be removed during cytoscopy, in which a urologist inserts a small, lighted camera into the urethra and up into the bladder. The doctor then uses a laser, ultrasound or mechanical device to break up the stones and flush the shattered pieces from the bladder with sterile saline. Another possible treatment is extracorporeal shockwave lithotripsy (ESWL), which uses sound waves to fragment the stones into smaller pieces that will more easily pass through the urinary tract. Other possibilities include endoscopic or open surgery. The doctor will recommend a specific method based on a patient’s specific situation, including the severity of the infection and the type and location of stones involved.

In some cases of pyelonephritis, some or all of the renal papillae can die. The renal papillae are the porous structures through which urine passes as it enters the interior of the kidney. In many cases, hospitalization and intravenous antibiotics will be sufficient treatment. If the patient does not respond, a physician will use either CT-guided percutaneous drainage or open surgery to drain or remove the infected tissue.

XGP is a rare, serious inflammatory disorder in which a destructive mass invades the main body of the kidney. It is most often associated with Proteus or E. coli-related urinary tract infections. XGP results in a non-functioning kidney that must be removed surgically (nephrectomy) in order to prevent the infection from spreading. If possible, surgery is delayed until the patient is stable.

Untreated, pyelonephritis can damage the kidneys and lead to reduced kidney function (renal insufficiency) or, rarely, complete renal failure. This may eventually lead to the need for dialysis or a kidney transplant. Prompt diagnosis and treatment of acute pyelonephritis with antibiotics usually resolves the infection. Symptoms will improve within one to several days with effective antibiotic therapy, provided there is no obstruction (stone or structural abnormality).

If there is obstruction, surgery is usually required for treatment. If pyelonephritis frequently recurs in the absence of an obstruction, doctors may prescribe a small, daily dose of antibiotic to prevent recurrences.