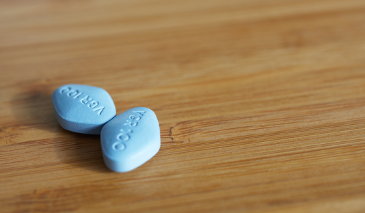 Erectile dysfunction (ED) is a condition in which a man has difficulty achieving or maintaining an erection. Treatment for ED, which affects an estimated 18 to 30 million men in the U.S., depends upon the underlying cause.

Three systems of the body are involved in developing an erection:

Treatment options for erectile dysfunction include:

In addition to helping a man achieve an erection, treatment may also involve dealing with the underlying condition that led to ED in the first place.

The most common treatments for erectile dysfunction are oral medications, including:

The American Urological Association recommends that doctors use these drugs as the first option for men with ED, unless they have a condition that would make the drugs unsafe (e.g., heart-disease patients who are taking nitroglycerin tablets).

These medications are usually taken about an hour before sex, although tadalafil can be used up to 36 hours before. They work by relaxing the smooth muscles of the penis, increasing blood flow, and result in harder and longer-lasting erections in about 80 percent of men who take them.

Most men have only mild or moderate side effects, which may include:

Men who are on nitrate drugs for heart disease should not take these medications. Doing so could cause dangerous drops in blood pressure. In addition, if an erection lasts for more than four hours, a patient should seek medical help immediately.

Men who do not respond to (or cannot take) one of the oral ED drugs may benefit from self-administered injected, implanted, or topical medications. These include:

One type of external device that may help men with ED achieve an erection is a vacuum pump (aka vacuum erection device). During use, a plastic tube is placed over the penis. The air is sucked out of the tube either manually or with a battery-powered pump to increase blood flow to the penis, and a ring is placed at the base of the penis to keep the blood from leaving and help maintain the erection.

These types of devices work in about 80 percent of men. The most common side-effects include bruising, skin irritation, loss of feeling, or pain. They can also make having sex feel less spontaneous.

Surgery is usually only recommended in men with severe ED who have not benefited from other treatments.

One surgical option is a penile implant or prosthesis. In this method, adjustable rods or inflatable tubes are placed inside the penis to make it firm enough to allow a man to have sex. Side-effects of this surgery include infection, breakdown of the implant, or the device inflating on its own.

Vascular reconstruction surgery, on the other hand, attempts to repair blood vessels of the penis to allow a man to have an erection. This can involve repairing the arteries that carry blood to the organ, or blocking veins to keep blood from leaving during an erection. This surgery is best for younger men and is often used when an injury has caused minor blood-vessel blockage.

Almost half of men with erectile dysfunction over age 50 suffer from cardiovascular disease, including heart disease and high blood pressure. These conditions can reduce blood flow to the penis and interfere with a man’s ability to have an erection. In fact, ED is often an early warning sign of heart disease. Treatment of cardiovascular disease may improve sexual function in men with ED, but more importantly it will also reduce risk of heart attack and stroke. Treatment includes:

Treatment of other conditions and diseases can also improve sexual function. For example, men with diabetes can reduce their risk of ED by maintaining healthy blood glucose levels. Also, riding a bicycle for extended periods of time can cause ED by compressing the nerves to the penis. This can be reduced by switching to a bicycle seat that puts less pressure on those nerves.

When no physical cause for ED can be found, psychological reasons may sometimes be to blame. These include:

Treatment for these conditions often involves talk therapy with a licensed therapist. This can be done alone, although it may be useful for your partner to take part, as well.

For severe cases of anxiety or depression, a therapist may also suggest medication to help relieve some of those symptoms.

What I need to know about erection problems. (2010). National Kidney and Urologic Diseases Information Clearinghouse (NKUDIC). NIH Publication No. 09-5483