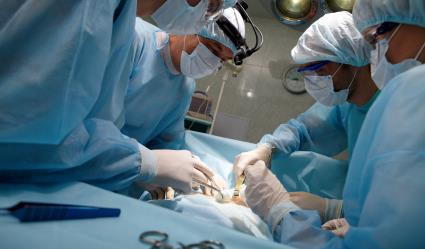 Ureteropelvic junction (UPJ) obstruction is treated surgically under general anesthesia. Prior to surgery, however, several tests are conducted to confirm how well the kidney is working—such as whether it is able to make urine and pass it from the renal pelvis (uppermost part of the ureter that links to the kidney) to the tube that transports urine from the kidney to the bladder (ureter).

Most cases of UPJ obstruction are congenital (present from birth), meaning the majority of these patients are infants and young children. Before surgery, children are monitored closely. If their kidneys are developing poorly or are not draining urine well, open surgery may be required to fix the obstruction.

In children, surgery involves removing scar tissue from the blocked area. Known as pyleoplasty, the procedure calls for the reconstruction or alteration of the renal pelvis, in which healthy parts of the ureter are joined to the kidney. In older children, this can sometimes be done less invasively via laparoscopy, in which tubes are placed through small incisions in the abdomen to allow the urologist to perform the surgery without a large incision.

In adults, surgerical options include:

Success rates vary depending upon the skill of the surgeon and the complexity of the obstruction. Laparoscopic pyeloplasty can have success rates as high as 95 percent. This is similar to the success rates of open surgery, but requires a shorter hospital stay and allows for a faster recovery.

For endopyelotomy, when the obstruction is removed using tools inserted through the urethra, success rates range from 80 to 90 percent. This procedure can also be done in older children, or repeated if the first attempt at surgery fails.

After surgery, antibiotics are given to prevent infections. If a stent was inserted in the urethra, it will be removed after four to eight weeks.

A follow-up exam is performed one to three months after surgery. This includes an ultrasound of the kidney. In addition, after three to six months, another test is done to see how well the kidney is functioning. This may include an imaging test using a small amount of radioactive material or an intravenous pyelogram, a special type of X-ray that shows how effectively the kidneys filter a dye injected into the blood.

Additional imaging tests may be done up to a year or longer after surgery, ensuring the kidney continues to work properly.