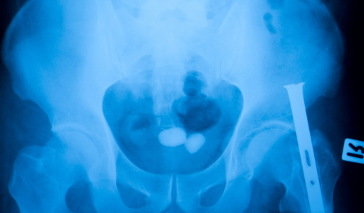 Bladder stones, or " calculi," are hard, calcified masses that form in the bladder, often as the result of urine remaining stationary for too long. Stones can also develop in the upper urinary tract and pass into the bladder, where they become stuck.

Although bladder stones occur in both genders, and affect people of various ages and health backgrounds, they are most common in men over the age of 60 and account for 1.5 percent of urology hospital admissions in Western countries. They can cause little to no pain, or they can cause severe discomfort.

What Are Bladder Stones Made Of?

Bladder stones can form from a variety of materials, and what they're made of depends on diet as well as the underlying trigger. In adults, bladder stones are most commonly made of uric acid, a chemical that is produced when the body breaks down purines, one of the main components of human genes. Normally, uric acid is passed out of the body in urine. But when a person's body produces too much uric acid, it begins to crystallize and harden into stones. These stones most frequently occur in people who eat a high-protein diet, have gout,or don't drink enough fluids.

Obstruction of the Bladder Outlet

The most frequent reason for bladder stones in adults is an obstruction that prevents the bladder from emptying fully. This causes the urine to remain immobile for too long, increasing the likelihood of stones. Patients with an obstructed bladder have a 25 to 30 percent chance of developing multiple stones. In men, this is often related to an enlarged prostate (benign prostatic hyperplasia). In women, it is more likely to be caused by kinks in the uretha (the tube that carries urine from the bladder) due to an underlying problem, such as a weakened wall between the bladder and vagina after childbirth or surgery. This causes pelvic organ prolapse.

Foreign Material Inside the Bladder

Foreign materials—sutures, surgical clips, ureteral stents, and intrauterine devices—can enter the bladder accidentally, particularly during or after a procedure on the urinary tract or reproductive system. When uric acid, calcium, or other chemicals become concentrated in the urine, the resulting crystals adhere to the foreign object and may eventually result in a bladder stone. Catheters may also cause stones in a small number of patients.

Nerve signals from the brain control emptying of urine from the bladder. When the spinal cord is injured, urine can remain in the bladder longer, which increases the risk of bladder stones. Between 15 and 30 percent of patients with spinal cord damage will experience at least one bladder stone within the first 10 years after injury. The risk of a stone forming increases after a patient has had one stone.

Bladder augmentation is a surgery that increases bladder capacity, and research indicates that bladder stones can occur in up to 53 percent of patients who have had this procedure done. The surgery can slow a bladder's emptying rate, which increases the risk of stones forming, and post-surgery infection of the urinary tract can also play a role.

In patients , such as those with bladder cancer, who have had their bladders removed or damaged, urine flow is diverted from its normal pathway. This can result in the formation of bladder stones in up to 50 percent of patients, depending upon the procedure used.

The main symptom of bladder stones is hematuria, the presence of blood in the urine. Other symptoms include:

How Are Bladder Stones Diagnosed?

The doctor will perform a physical exam to determine if the patient's bladder or prostate (in men) is enlarged, as well as ask questions about any symptoms. In addition, a physician may order tests to help determine if the symptoms are being caused by bladder stones. Two such tests are:

There are several bladder stones treatment options will depend upon the severity of the bladder stones as well as other underlying health factors that are involved.

Ureter Stones
Kidney Stones: What They Are, What Causes Them and How Your Doctor Makes a Diagnosis
Abdominal Pain