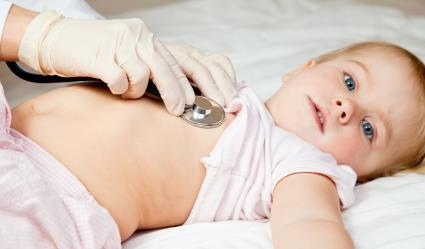 Neuroblastoma is a type of pediatric cancer that occurs when neuroblasts fail to mature into functioning nerve cells, and instead become cancer cells that then cause a tumor to develop anywhere nerves are present. The mass that forms is most commonly seen in the nerve tissue of the adrenal glands, which rest atop the kidneys and generate hormones that manage the body's blood pressure, heart rate, and blood sugar. A hard lump may also be found in the abdomen, chest, neck, pelvis, and spine as well.

The location of a neuroblastoma tumor and whether it has metastasized will determine the type of symptoms, which can include loss of appetite, fatigue, joint pain, and fever. While some cases go away on their own, others will not and require multiple neuroblastoma treatments.

Most neuroblasts are able to mature completely within a typical gestational period, although a small number of immature neuroblasts may be present at birth. For most newborns with immature neuroblasts, the neuroblasts either mature or disappear. However, in the case of urological neuroblastoma, the underdeveloped cells multiply and form a tumor within the adrenal region. It is not completely clear why some neuroblasts develop into neuroblastoma and others don't, but recent research has found that a defect in the genes of a neuroblast can cause it to divide uncontrollably and act as a cancer cell. With Wilms Tumor (nephroblastoma), a condition similar to neuroblastoma, researchers believe that the kidney cells can develop errors in their DNA during a child's early development.

The signs and symptoms associated with neuroblastoma depend upon the area of the body affected. Urologically speaking, neuroblastomas in the abdomen can alter urinary habits if they press on the urinary tract. The signs include:

Additional symptoms associated with neuroblastomas found in the abdomen include:

When this type of cancer originates in or invades the chest, neck, pelvis, and spine, symptoms may include:

When determining the extent of the cancer, a staging system is applied. The following stages include:

If neuroblastoma is suspected, a combination of tests may be performed in order to confirm the diagnosis, such as: