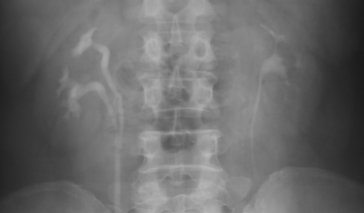 Intravenous pyelography (IVP) is a diagnostic test that uses X-rays and a contrast dye to image the kidneys, bladder, and ureters for kidney stones, bladder stones, UTI and related issues. This dye, also known as contrast medium, is iodine-based and allows doctors to see parts of the body that do not otherwise show up on x-rays. It is injected into a vein, usually in the arm, and from there makes its way through the kidneys and the rest of the urinary tract. If the dye moves through the urinary system more slowly than expected, it may suggest a tract obstruction of the blood flow in the kidney or reduced kidney function.

When Is IVP used?

A doctor may order IVP to help find the cause of one or more of the following symptoms:

Each of these symptoms can have several possible causes. IVP can help doctors diagnose UTIs, urinary retention, kidney or bladder stones, various kidney diseases, enlarged prostate, abnormalities of the urinary tract, and tumors.

IVP is usually an outpatient test done in a hospital’s radiology department or an imaging center by an x-ray technician. The technician will first give her patient a gown to wear and ask him to empty his bladder. Then, the technician will insert an IV in the patient's arm and inject contrast dye into the IV. She'll proceed to take a series of x-rays over the course of 30-60 minutes, as the dye moves into and through the kidneys, ureter, and bladder, then give the patient a bedpan and ask him to urinate before the final image is taken so she can see how well the bladder empties.

The patient must hold still while the x-rays are being taken. The technician may ask him to change positions during the course of the test. Additionally, a compression belt that contains two inflatable balloons may be used to hold the contrast material in the kidneys. When the test has completed, a radiologist will interpret the images and consult with the patient's urologist or primary care doctor.

Some people are allergic to the contrast dye. This may happen even if someone has had no problem with previous tests using contrast dye. If a patient has an iodine allergy, an alternate test such as retrograde pyelography, MRI, or ultrasound will be done instead. An allergic reaction to contrast dye is often experienced as persistent itching, sometimes accompanied by hives. Rarely, patients may have shortness of breath and swelling of the lips, throat, and other parts of the body. Tell the technician immediately if you experience these.

Most people feel a sting as the contrast is injected, sometimes followed by a flush of warmth, mild itching, or a metallic taste. These are normal side effects and usually disappear in a minute or two.

Additionally, the contrast dye contains a low dose of radiation. However, most doctors believe the benefit of an accurate diagnosis far outweighs the minor risk this dose presents. Children are more sensitive to the risks of radiation, as is a fetus during pregnancy. (Doctors usually do not prescribe IVP during pregnancy unless it's absolutely necessary.)

Computed tomography (CT) scans have largely replaced IVP; however, in some cases, IVP may be used to obtain a more detailed image of the kidneys. Physicians may evaluate different parts of the urinary tract using other imaging technologies that may or may not require the use of contrast agents. These include ultrasound, magnetic resonance imaging (MRI), cytoscopy, retrograde pyelography, DMSA scintigraphy, and radionuclide cystography (RNC), contrast cystography, urethrography, voiding cystourethrography (VCUG), and ileal loopograms (ileostoureterography).