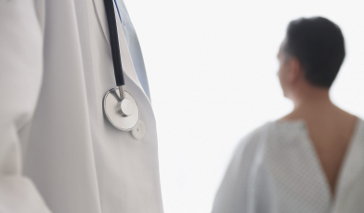 Peyronie's disease is a connective tissue disorder that causes flat scar tissue (a plaque) to form within the penis. Possibly triggered by injury, Peyronie's disease begins with localized inflammation that, over time, turns into a hard plaque. The condition can be painful and, depending on the location of the scar tissue, often causes the penis to bend either up or down during erections.

The cause of Peyronie's is not fully understood, but it may result from damage to the penis. The penis has a sponge-like tube (corpus cavernosum) on each side that consists of small blood vessels. When a man is aroused, blood flows through the corpus cavernosa and causes the penis to stretch and stiffen. The corpus cavernosa are covered and protected by a thick sheath of tissue, called the tunica albuginea, that also expands during an erection. If the shaft of the penis is injured, usually through sexual activity, tiny blood vessels in the tunica albuginea can rupture and scar tissue can form.

Not all penile injuries result in Peyronie's disease, and not all cases of Peyronie's can be traced back to injury. An immune cell marker for the condition has been found, and this may indicate that heredity also plays a role.

Scar tissue, inflammation, and an arc to the penis are the most common indicators of Peyronie's disease. Other signs and symptoms can include:

Symptoms may develop slowly or suddenly. In mild cases, the inflammation may resolve without resulting in a permanent bend. In more severe instances, however, symptoms may lessen over time, but the erect penis may continue to bend, making sexual activity difficult and uncomfortable.

Incidence and Risk of Peyronie's Disease

Peyronie's disease affects anywhere from 1 to 23 percent of men between the ages of 40 to 70. Thirty percent of those with the condition also have hardened tissue on other body parts.

Beyond injury—which can occur while playing sports, engaging in sexual activity, or during surgery or radiation treatment on the prostate—various factors may increase a man's susceptibility to Peyronie's disease.

A physical exam is typically all it takes for a physician to diagnose the condition. The plaque can be detected in a flaccid penis but, in some cases, an erection may be necessary in order to determine the severity of the disease.

An ultrasound or x-ray can determine the location and extent of the plaque. And, if erectile dysfunction is one of the symptoms, the imaging test can also evaluate blood flow.

Because research has not yet determined the root cause, many treatments for Peyronie's disease are experimental. Physicians may prescribe antibiotics or a variety of different therapies (including vitamin E), depending on the symptoms. Surgery is typically recommended for chronic cases.

Priapism
When Your Prolonged Erection Turns into an Emergency: Signs Your Penis Is In Danger
Peyronie's Disease Treatments