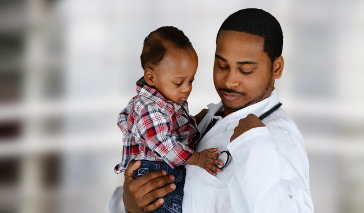 Hypospadias is a congenital condition in which the opening of the urethra—a tube that carries urine from the bladder outside the body—is not located at the tip of the penis but instead positioned underneath, mid-shaft, at the base of the penis, or next to the scrotum. It is one of the more common birth defects: According to the US Centers for Disease Control and Prevention, it occurs in as many as one in every 200 male births in the US.

In about 80 percent of cases, the opening is still near the head of the penis, and about 30 to 50 percent of the time the condition is accompanied by a slight downward curve of the penis (chordee). The goal of treatment is to straighten the shaft, fix the urinary channel, and relocate the urethral opening to the glans. Often, testosterone supplementation will also be given to enlarge the penis in preparation for surgery.

Hypospadias treatment options are almost exclusively surgical. The technique used depends on the specific location of the opening, as well as a surgeon's own preferences and experience. Hypospadias repair has four main goals:

Infants with hypospadias should not be circumcised, since their foreskin can be used to aid in the repair. During the procedure, surgeons graft tissue from the foreskin to lengthen the existing urethra, allowing it to open at the tip of the penis. If necessary, they can also use foreskin to reconstruct the penis tip. When chordee is present, the surgeon cuts the curved portion of the penis to loosen the tight tissue, then sutures in healthy grafts.

Pediatric medical societies recommend the surgery be performed when an infant is somewhere between 6 to 12 months old. While it can be done at any age, younger children tend to experience less discomfort from the procedure.

Without surgery, hypospadias may cause permanent issues with controlling and directing the urine stream, abnormal curvature during erection, and even fertility problems.

If a child experiences normal urinary functioning post-surgery, his prognosis is good.

Surgical complications occur in less than 10 percent of all cases; risk varies depending on the location of the urethral opening and the patient's age. One of the most common problems is urethrocutaneous fistula (an abnormal connection between the urethra and skin of the penis), which occurs in nearly half of all teen and adult patients.

Other side effects include bleeding, blood clots, scarring, infection, difficulty urinating, slow urinary stream, urethral strictures, and blockages. While the majority of complications happen within a couple of months, some may not arise until years later. Most of these, however, can be repaired with a follow-up procedure.