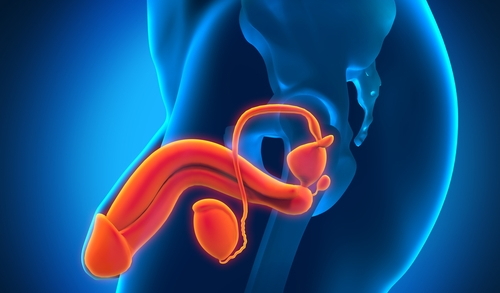 The male reproductive system includes the penis, testicles, urethra, prostate gland, and other structures. Together, they are responsible for making and transporting sperm and producing male sex hormones.

What the Male Reproductive System Does

The main functions of the male reproductive system are:

The urethra, which is part of both the male reproductive system and the urinary system, has the dual function of transporting sperm and urine.

Components of the Male Reproductive System

The male reproductive system includes both internal and external structures. The structures outside the abdomen and pelvis include the testicles, scrotum, and penis.

Penis: The function of the penis is sexual intercourse, as well as the transport of urine out of the body through the urethra that runs through it. The penis consists of a root attached to the abdomen; the body, also known as the shaft; and the glans, or the cone-shaped head of the penis. The tip of the penis is covered with a loose layer of skin called the foreskin, which is sometimes removed during a medical procedure called circumcision.

The penis is shaped like a cylinder and has three chambers inside made of erectile tissue. This sponge-like tissue has many large spaces. During sexual arousal these spaces fill with blood, which causes the penis to become rigid and erect. This enables the penis to penetrate the female reproductive tract during sexual intercourse.

The penis is responsible for expelling (ejaculating) sperm inside the female reproductive tract during sexual climax (orgasm). Urine is prevented from entering the urethra while the penis is erect, which allows only semen to be ejaculated.

Testicles: Most men have two testicles, which are located in the scrotum and secured in place by the spermatic cord. They produce both the male hormone testosterone and sperm. Sperm cells are manufactured inside the seminiferous tubules, which are coiled masses of tubes inside the testes. The process of making sperm is known as spermatogenesis.

Epididymis: On the backside of each testicle is a long, coiled tube known as the epididymis, which stores and transports sperm produced in the testes. The epididymis is also the site where sperm mature before entering the vas deferens during sexual arousal.

Vas deferens: This long, muscular tube carries mature sperm from the epididymis to the urethra prior to ejaculation. The vas deferens joins the urethra just behind the bladder.

Urethra: The urethra carries urine from the bladder, through the penis, and out of the body. In men, the urethra also carries semen, which is ejaculated during orgasm.

Seminal vesicles: Attached to the vas deferens near the base of the bladder, these sac-like pouches produce a fluid that is rich in sugar (fructose). This fluid, which makes up most of a man’s ejaculatory fluid, helps sperm move (motility) by providing them with a source of energy.

Prostate gland: Located below the urinary bladder and in front of the rectum, this walnut-sized structure produces fluid that enters the ejaculate and nourishes the sperm. The prostate surrounds the urethra, the tube that carries the ejaculate that is expelled from the body during orgasm.

Bulbourethral glands: Also known as Cowper’s glands, these pea-sized structures are located just below the prostate gland, on both sides of the urethra. These structures make a clear fluid that lubricates the urethra and counteracts the acidity of any urine leftover in the urethra.

How the Male Reproductive System Functions

Three main hormones are involved in the functioning of the male reproductive system—testosterone, follicle-stimulating hormone (FSH), and luteinizing hormone (LH).

Both LH and FSH are made in the pituitary gland, which is located at the base of the brain. FSH is needed for the production of sperm (spermatogenesis), and LH stimulates the production of testosterone in the testicles. Testosterone plays a role in the development of many male traits, such as muscle strength and mass, bone mass, distribution of fat, and sex drive.

Several urological conditions can affect the male reproductive system, including: