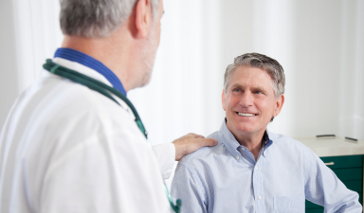 A prostate biopsy is a medical test in which a number of small tissue samples are removed from the male prostate gland and examined for signs of cancer.

What is the Prostate?

The prostate is a walnut-shaped gland that is part of a man’s reproductive system. It is located in front of the rectum, just below the bladder, and it surrounds the urethra (the tube in the urinary tract that transports urine from the bladder out of the body). The prostate produces fluid that makes up a large percentage of the ejaculate from the penis.

When is a Prostate Biopsy Done?

Physicians may order a prostate biopsy in a few situations:

The most common method for a prostate biopsy uses transrectal ultrasound to guide a hollow needle to the prostate.

The prostate biopsy, which takes around 30 minutes, can be done under local anesthesia at a doctor’s office or an outpatient clinic. If necessary, a sedative can also be prescribed to help a patient relax before the procedure starts.

How to Prepare for a Prostate Biopsy

A patient may be asked to self-administer an enema before the procedure in order to clean out the rectum and decrease risk of infection. He may also be prescribed antibiotics as an additional precaution against infection; these should be taken an hour before the procedure and for two to three days following it.

Additionally, certain drugs can increase the risk of bleeding. A patient shouldn't change medications unless instructed by his doctor, but should inform his physician if he is taking any of the following:

Prostate Biopsy Risks and Side Effects

The most common side effects of a prostate biopsy are:

If the patient experiences more severe symptoms, including chills, pain or high fever—or if he is concerned about any of his symptoms—he should contact his doctor immediately.

It usually takes a few days to get the results of a prostate biopsy. If they indicate the presence of cancer in the prostate, imaging exams (like a CT scan or MRI) may be conducted to see how far the cancer has spread. After that, various prostate cancer treatment options are available.