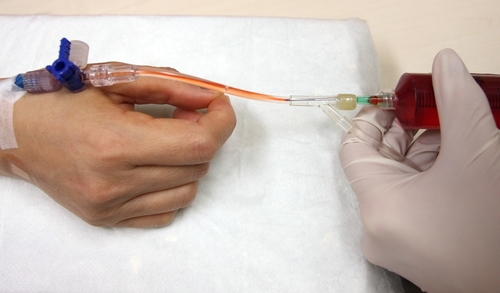 Chemotherapy uses medications to destroy cancer cells and/or prevent their growth. In the field of urology, chemotherapy can be used to treat cancers of the urinary tract and male reproductive system. Though effective, treatment carries a number of side effects—some minor and correctable, others more serious.

Chemotherapy—which can be taken orally, put on topically, or injected into a vein, muscle, artery, or peritoneal cavity—is generally used for advanced stage cancers that have spread from the original tumor site (metastasis) to other organs and tissues.

Chemotherapy drugs are designed to target rapidly growing groups of cells. These cells are characterized by an increased rate of dividing, as cells in the body multiply by splitting in two (mitosis). The drugs treat cancer by locating cells that are undergoing mitosis and either kills them or slows their growth. With palliative care, chemotherapy can be used to shrink the tumor and reduce symptoms like pain and pressure.

Because chemotherapy is administered with the intent of entering the blood stream and spreading throughout the body, it is generally not a targeted treatment. Chemo drugs are trying to find the cancer cells wherever they may be in the body. Since cancer cells are not the only cells which undergo mitosis, they are not the only types of cells destroyed by the chemotherapy drugs. This contributes to the number of side effects associated with treatment. As a result, chemotherapy is rarely recommended as the first line of treatment after a diagnosis of cancer is made, unless the cancer is advanced and has spread to other areas of the body. In that case, chemo may be the best option, or it may be combined with other treatment types like radiation therapy and surgery.

Side effects of chemotherapy depend on the type of drug used. While some effects may occur during treatment, others may develop after.

During treatment, the following symptoms may occur:

After treatment, side effects may present months or years later, including:

The most common types of urological cancers seen and treated with chemotherapy are:

Other urological cancers that can be treated with chemotherapy include:

Chemotherapy has been shown to be relatively effective in treating all of the above types of cancer; however the range of effectiveness is broad. Renal (kidney) cell carcinoma shows only minimal effectiveness, while testicular cancer, particularly seminoma, shows success rates of 70-80% in stage III types.

Transitional cell carcinoma, the most common type of bladder cancer, when it has reached the stage of metastasis, has a treatment success rate of approximately 50%. The “gold standard” treatment regimen for this type of cancer is a combination of methotrexate, vinblastine, Adriamycin and Cisplatin, referred to as MVAC.

Chemotherapy side effects sheets. (2012). National Cancer Institute at the National Institutes of Health.